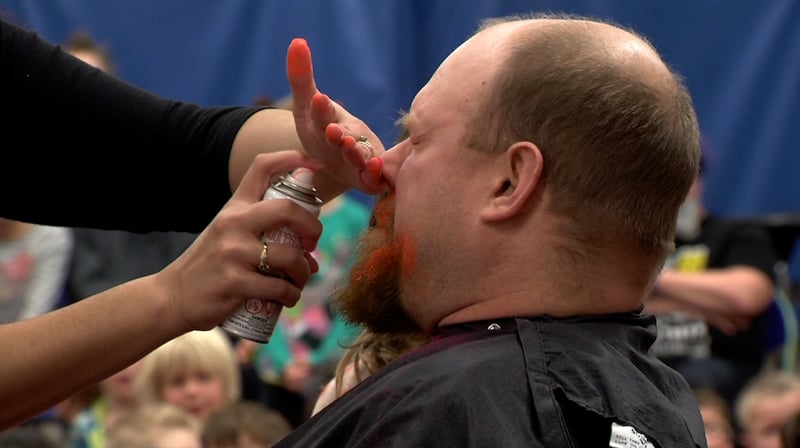 A recent assembly at the Aquarian Charter School brought a showdown of the best beards and mustaches, all grown during the month of November.

For No Shave November, or Movember — the time in which men grow out their beards as an awareness campaign for cancer — the Aquarian held a fundraiser.

“At lunchtime, our student council representatives would run a ticket booth,” said principal Lucas Saltzman. “And if a kid bought a ticket for a dollar, they’d drop it in the can of the five adult staff members that they wanted to shave at the end of the month.”

The silly mustaches and painted beards at Aquarian’s Movember makeover brought some color to the serious subject of cancer. At the school, Saltzman says Movember carries a message that hits home for all — the importance of early cancer detection.

Veteran Iditarod musher DeeDee Jonrowe, a special guest at the assembly, gave a speech before the styling fun began. When Jonrowe asked how many students had a family member who have or had cancer, almost all hands in the room went up.

“We’ve had a lot of families affected, from kids in our community to parents that we’ve lost,” Saltzman said. “Personally, I’ve been affected, staff’s been affected.”

Saltzman says he was happy to lose a little hair if it meant more awareness for a cause close to Aquarian’s heart.