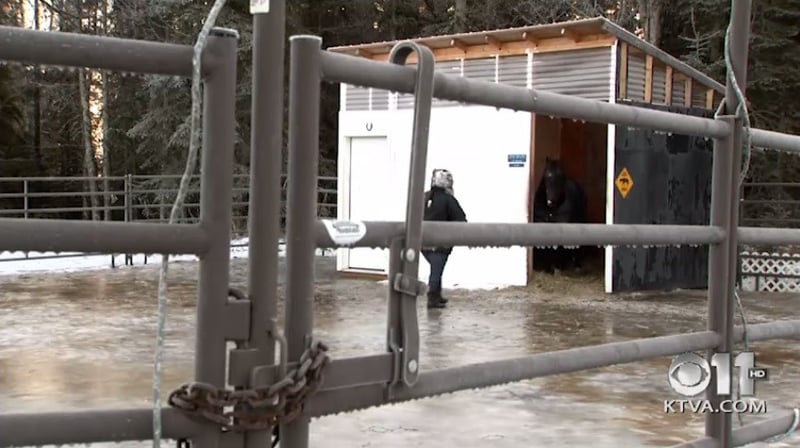 You know you’ve reached a special level of friendship when words aren’t necessary, you simply feel the support. Such is the case between 26-year-old Cristal Barton and 35-year-old horse Major.

Their connection was instant.

“Surviving, learning, living and loving unconditionally. He saved me and I saved him,” said Barton, who is autistic, but highly functioning.

Major is her official support animal — she uses him to help process her emotions.

“In case I have problems or I’m frustrated or I’m sad or I’m pure angry, I use Major as my way of calming myself quickly,” Barton said.

Barton’s mother, Kim Garretson, said daughter’s behavior used to be much worse. Barton would have manic episodes and hardly came out of her room.

“When you watch your daughter go from 23 hours a day in her bedroom to eight or nine, that’s substantial,” Garretson said.

But there was one big problem with having Major — their home sits on a quarter-acre lot. Kenai city code says Major needs almost four times the amount of space.

Last September, the Planning and Zoning Committee said the horse must go. Garretson appealed the decision and asked for a conditional use permit.

“I love my daughter and as a mother I will do anything and everything to make sure that they have what they need to live a full productive life,” Garretson said.

After months of waiting for a response, Garretson and Barton learned on Thursday that they would be allowed to keep Major and were issued the needed permit.

However, officials said this story may have ended very differently had the Fair Housing Act not been a factor. When a person with a disability requests an exception to a local zoning ordinance in order to keep an emotional support animal, the FHA may require the local government to do so under reasonable circumstances.

Major is an old horse and Barton said in their short time together he’s already taught her so much.

“The last thing he is going to teach me is grief. That it’s OK to cry,” she said.

Barton said she is thankful the city will allow her horse to spend the rest of his life at home with her.