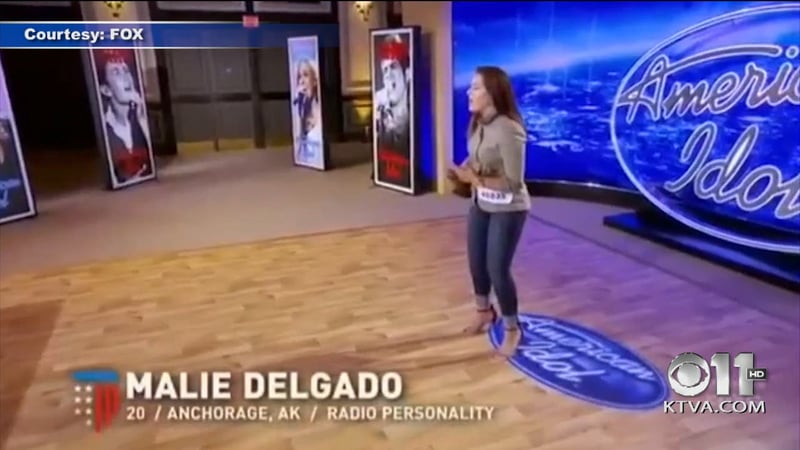 An Anchorage radio co-host has made her way onto the American Idol stage in Hollywood. Malie Delgado is better known as “Malie D” from KGOT’s morning show the Breakfast Club.

“It’s been a crazy busy morning. We’ve had a ton of calls from listeners saying congratulations and good luck,” Delgado said.

The 20-year-old appeared on the final season of the hit Fox show on Thursday night. Delgado said it was her chance to not only showcase her singing but her hometown as well.

“I’ve always been so proud of being from Alaska. I’m fifth generation Alaskan,” she said. “I wanted to be able to share how amazing Alaska is with the rest of the nation.”

She’s been co-hosting the morning show with Casey Bieber for about a year. Together they work to brighten up people’s drive to work with fun stories about trending topics. On Friday, that just happened to be the news about Delgado.

“I knew as soon as she went down that this is huge,” Bieber said. “Her life will change as soon as she hits the air. When Ryan Seacrest said, ‘Here’s singer Malie,’ it was like yep, she’s arrived.”

Her audition song was Chariot by Gretchen Wilson. Delgado said it was a hard decision but she wanted to stick with the country genre she loves most.

“It’s like rock and soul and country all mixed together,” she described.

In the middle of the soulful song, Delgado busted out a rap that made the judges, especially Keith Urban, smile.

“My goal was to stand out,” she said.

Mission accomplished, with a golden ticket to the next round. She’s not the only Alaskan going to Hollywood though. University of Alaska Anchorage student Monica Repuya also made it through.

Delgado said she and Repuya “practically grew up together,” and both took voice lessons from the same coach.

She hopes her passion for singing will carry her to the finals.

“It calms me, gives me peace, it makes me feel at home even if I’m traveling or anywhere else. Music is just kind of my sanctuary.”