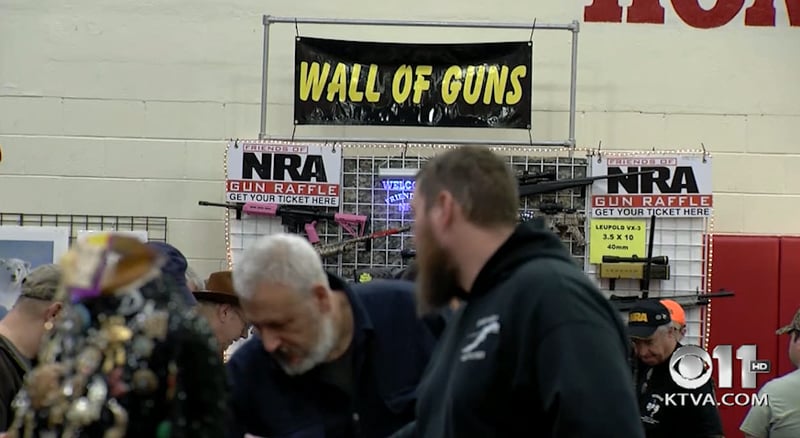 For 32 years, Wasilla High School has hosted a fundraiser for its hockey team. But instead of a bake sale or car wash, they hold a gun show inside the school’s gym.

Organizers say the school simply serves as a venue for the hockey team’s booster club, which is able to raise up to $40,000 during the show each year. It’s a uniquely Alaskan event that brings thousands to WHS to support the team.

“It covers all of their ice bills and all of their equipment,” said DeKay Bayliffe, president of the booster club, adding that it’s one of the largest gun shows in Alaska. “The parents here do not have to spend a dime other than their initial registration fee.”

About 175 different vendors were selling rifles, handguns and knives. Each vendor pays a $50 fee, and all visitors pay $5 to enter.

“It’s a really good feeling because 100 percent of our proceeds do go right back to our hockey program,” said Bayliffe.

Bayliffe notes many people at the fundraiser came to catch up with old friends.

“I just come out here to see people that I haven’t seen for a long time,” said visitor Harry Buzby, adding that he brought his grandchildren along to teach them about gun safety and Second Amendment rights.

Besides weapons, there were also food items and jewelry for sale.

“I’m not a huge gun fan,” said Wendy DeGraffenreid. “I’m more excited about the jewelrey than the guns.”

Following President Barack Obama’s promise to tighten gun control, one vendor said the announcement might be good for gun sales.

“He has sold more guns than any president out there,” said vendor Conrad Holler. “I guess it’s because everybody anticipates what he’s going to do, not what he has done.”

Holler notes there are concerns that the Alaska economy might hurt sales this year, but said everyone ultimately comes to the gun show for the same reason.

“It’s for the Wasilla High School hockey team — and we back our Warriors. We really do here in this Valley,” he said.

The gun show continues Sunday at Wasilla High School from 10 a.m. to 5 p.m. All firearms must be checked at the door.

The post In Wasilla, unique fundraiser brings Valley together appeared first on KTVA 11.