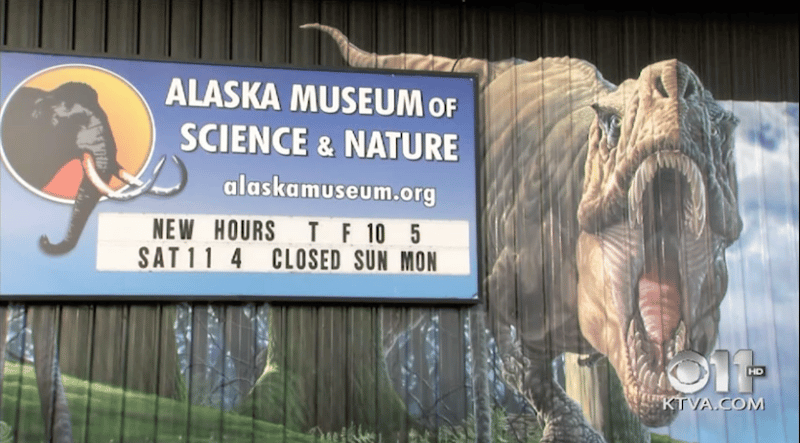 A popular museum in Mountain View closed its doors last week without warning, leaving teachers with field trips in the lurch and people who bought annual passes asking questions.

People who visited the Alaska Museum of Science and Nature called it a Mountain View gem. The nonprofit boasted hands-on exhibits about local natural history, including dinosaurs.

But the board of directors decided Thursday to shut it down, and announced the news in this Facebook post:

One woman commented on the post, upset with how it was handled, saying “We had a preschool field trip this Wednesday, you do not tell 4 year olds they have an awesome field trip coming up, and then cancel.”

Another woman said, “I literally just bought a year pass. Are you going to reimburse the fee?”

Board President Kris Crossen told KTVA over the phone that until the board meets again on Thursday, she can’t answer those questions. She wouldn’t elaborate on why they had to close, but said, “We as a board have to be responsible.” She hinted at financial troubles, saying there are things a board never wants to do, like declare bankruptcy.

I was surprised and saddened when I read about the Museum closing its doors, especially so suddenly. We truly hope that the organization can find ways to restructure and secure support to reopen soon. The Alaska Museum of Science and Nature is one of Mountain View’s most treasured assets. They have been one of our most involved and generous neighborhood partners.

Pick.Click.Give. still lists the museum as an organization you can donate to through their program. The museum received $3,400 through the site in 2015.

Jason Grenn, Pick.Click.Give. manager for The Alaska Community Foundation, said in an email Wednesday that as of now the Alaska Museum of Science and Nature is still an operating and legal 501(c)3.

“Though they have closed the museum building, it is our understanding they hope it is only temporary,” Grenn wrote. “The 501c3 (sic) is still a functioning body. We’ll be monitoring their situation closely to see if anything changes.”

He said when people choose to donate through the program when applying for a PFD, it’s only a “pledge.” Donations or other garnishes aren’t taken out until the PFD office starts distributing checks in October. If the nonprofit organization is no longer functioning at that time, no pledges will be assigned to that organization.

Grenn added that people can add to or delete their Pick.Click.Give. pledges through Aug. 31.