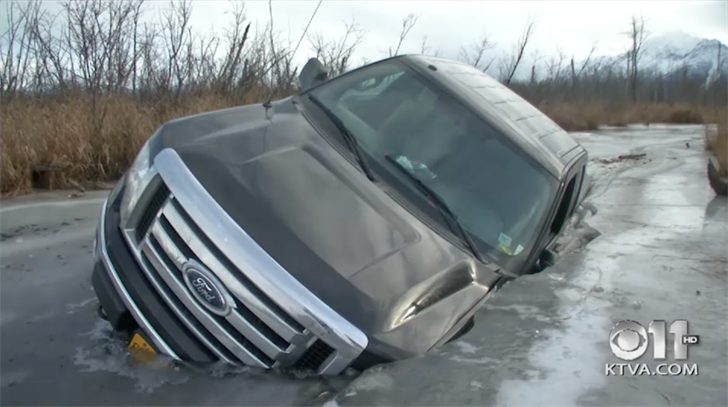 Off-roading on the refuge is illegal without a permit. The Alaska Department of Fish and Game only issues permits to vehicles like snow machines and four-wheelers when the ice is frozen solid and there’s a foot of snow on the ground.

Refuge Program Coordinator Joe Meehan said people regularly take their chances on the ice, regardless of the half dozen warning signs along the roadway.

“Normally we don’t catch them in a normal winter because the ice is frozen enough and they’re gone,” Meehan explained. “But this winter the ice is so thin they’re falling through. So they can’t go anywhere until they get a wrecker.”

A Ford truck was stuck in the ice Friday near the same area a Jeep fell through in December. It requires a special tow truck to pull the vehicles out. Meehan said the tow truck driver has to drive across the frozen marsh so it doesn’t get stuck in the ice too. Then crews have to cut the vehicle out with a chainsaw.

Meehan said off-roading isn’t just dangerous for drivers; it can have a harmful impact on the environment too.

“If it drags across the bottom of the creek it could tear up the area where the salmon have spawned and their eggs are incubating in the gravel,” he said. “Obviously, contaminants from the vehicles could leak out and contaminate the water.”

Meehan said crews will likely remove the Ford on Saturday or Monday, depending on when the specialized tow truck is available.

Off-roading without a permit on the Palmer Hay Flats is a Class A misdemeanor that carries a fine of up to $10,000 and one year in jail. The driver is also responsible for the cost of removing the vehicle.