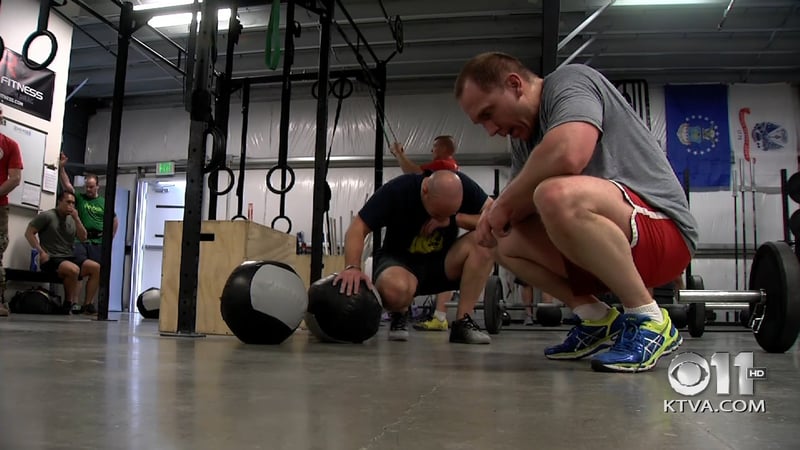 Alaska National Guardsmen gathered Monday for a workout called 22 WOD to End Veteran Suicide. The WOD, or Workout Of the Day, is a national CrossFit event geared toward raising awareness about suicide prevention.

Despite increasing mental health services, the number of veteran suicides in Alaska may be growing. Eight vets took their lives during fiscal year 2014, versus five the fiscal year before.

Nationally, an average of 22 vets commit suicide each day. It’s a staggering number the military is working to combat through events like 22 WOD, which recognize those lives lost.

At the gym on Camp Carroll, Joint Base Elmendorf-Richardson, service members took part in a work out so tough, SSgt. Oliver Meza said it’s almost like going into combat.

“High stress, adrenaline, sweat — you’re giving everything you got so it’s almost replicating that environment,” he said.

They completed 22 different exercises, doing 22 reps of each.

“They designed it to make us sweat and work for it and get through it but there was a lot of teamwork out here and everybody was helping each other out,” Meza said.

The workout may be fun, but it has a serious message. Alaska National Guard Chaplain Rick Koch said he sees Guardsmen struggle along with their active duty brethren.

“I remind them that they’re not alone, that the military is like a big family,” Koch said. “It’s like a group of people who are going to surround one another, a very resilient group.”

Events like 22 WOD can help by bringing service members together. They’re breaking down walls by breaking a sweat.

“We’re just trying to be more and more attentive to what their needs are and trying to strengthen them and bring them resilience,” Koch explained.

Half way through the workout, at the 22-minute mark, the Guardsmen held a moment of silence for the 22 lost every day.

Meza, an Iraq combat vet, said he has friends who are struggling and it felt good to take a breath and reflect.

“Suicide and hard times are something I have to deal with and I see them deal with every day,” he said.

Koch said the biggest warning sign someone might be considering taking their life is if they talk about hurting themselves. He said it might not sound bad, but any indication someone is considering self-harm should be taken seriously.