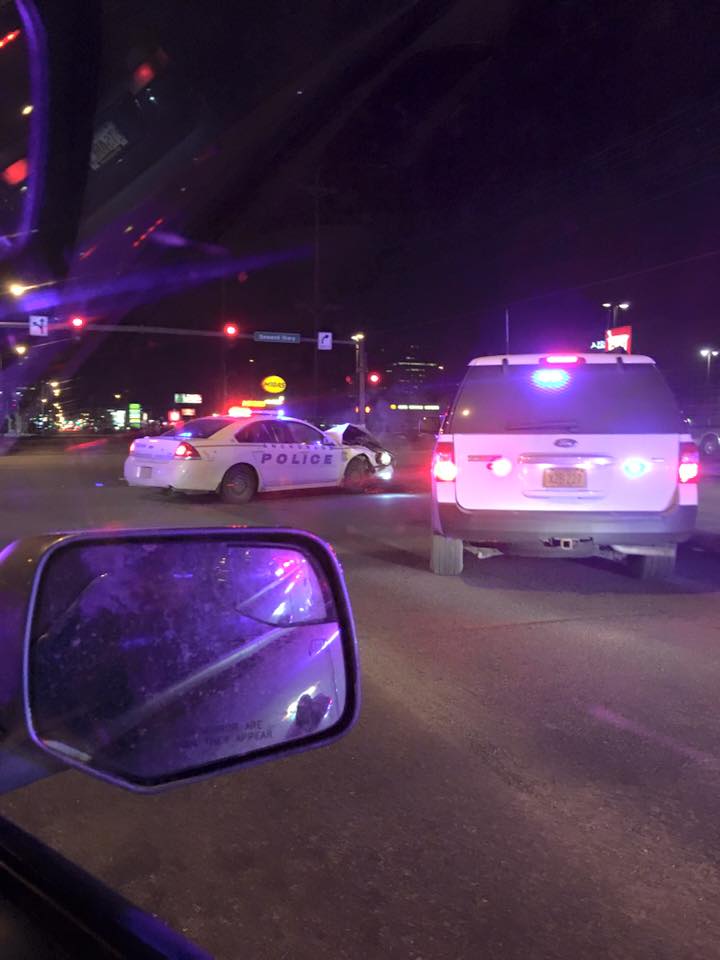 An Anchorage police vehicle was involved in a collision Saturday evening on its way to a report of shots fired.

Anchorage police spokeswoman Renee Oistad said in an email the collision occurred at 7:50 p.m. at the intersection of Northern Lights Boulevard and the New Seward Highway. Several officers in their vehicles were responding to a report of shots fired, which Oista said later turned out to not be accurate.

With their lights flashing, the officers, traveling westbound on Northern Lights, approached the intersection with New Seward.

“The westbound lanes had a red light,” Oistad said. “The first patrol car to reach the intersection came to a complete stop, and then slowly began to clear the intersection.”

Oistad explained that traffic in the first two lanes had come to a stop to let the police vehicles through, but two large semi trucks in the second lane blocked the view of the third lane of the highway.

“As the patrol cars were slowly making their way into the third and final lane of traffic, a small dark sedan traveling at a high rate of speed came down that third lane,” Oistad said. “The officer driving the first patrol car slammed on his [brakes], missing the sedan by about a foot. The sedan then hit the front side of the second patrol car.”

Oistad said the only person injured in the crash was a civilian rider inside the police car.

“She was checked at the hospital for banging her knee but was released shortly thereafter and is fine,” she said.

The police vehicle is insured by the city, Oistad said, adding that she had no information on the cost of damages to either vehicle involved.