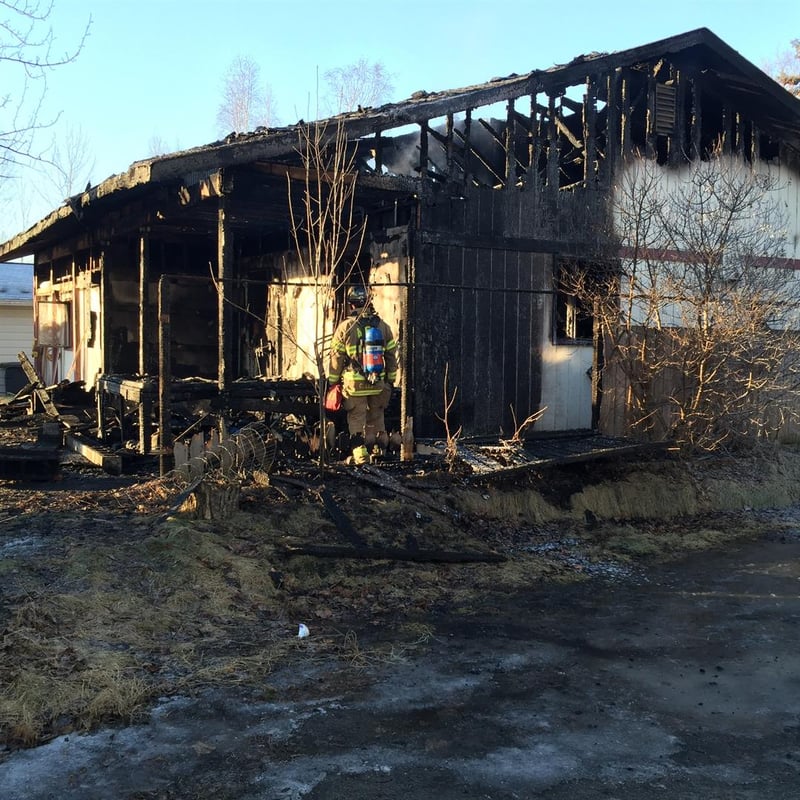 The Anchorage Fire Department fire investigator concluded an investigation of Thursday’s Young Street fire and has deemed the cause of the fire incendiary, according to a press release Friday.

AFD is asking the public for help to identify anyone responsible. The release stated Crime Stoppers pays a cash reward of up to $1,000 for information resulting in an arrest for any felony crimes reported to Crime Stoppers.

A fire that destroyed a home at 3609 Young Street on Thursday morning was fueled by a natural gas leak at a meter connected to a gas-fired hot tub, according to an afternoon release from the Anchorage Fire Department.

AFD spokesman John See said a neighbor called in to report the fire, saying the roof of the single-family home was burning and it had spread to a wooden fence. The caller said one person lived there and they didn’t know if the person was still in the home.

Thirteen units responded just after 5:30 a.m. and immediately deemed the situation an active, working fire. Anchorage fire captain Eric Tuott on the scene said crews were relatively close to the residence, but when they arrived it was already halfway burned. He said his team went to work immediately to contain the fire.

Tuott said crews found natural gas leaking from the meter on the back of the home, but they weren’t able to turn off the gas.

“We could identify with the sound and intensity of the fire that the gas hadn’t been secured and it was fairly risky for our crews,” he said. “Especially at the point with the amount of damage and the fire that was burning in the house, it was pretty apparent that there was no one that was survivable within that area.”

At that point, Tuott said his team went on the defensive to protect nearby structures from catching fire, while they waited for Enstar Natural Gas to arrive and aid in turning off the gas.

On a normal fire, Anchorage Fire Department crews would secure the gas at the meter. However, the fire had destroyed the meter causing free-flowing natural gas. Enstar must then respond to the scene and locate the gas line, dig it up and clamp it off, Tuott said.

“All of that takes a lot of time for us to wait for them and to fight the fire after the gas has been secured,” he said.

Due to the amount of damage — Tuott said the home appears to be a complete loss — AFD requested a fire investigator to review the incident.

Searches of the home by AFD did not find anyone inside the home. While the fire investigator still needs to make the final determination, Tuott said they believe that no one was inside or involved with the fire.

He said it’s hard to say if there was anything unusual about the fire, but the amount of natural gas that was leaking contributed to the amount of damage. It is not known if the gas line started the fire; the cause is still undetermined. KTVA was told early this morning that officials don’t believe there was criminal activity involved.

A neighbor’s shed and camper were damaged by the intense heat of the fire, according to the release. See said the person who lives in the home had not been contacted and assistance from Red Cross has not been requested.

An earlier version of this story said AFD responded around 6 a.m. to 3631 Young Street. Also, See originally told KTVA that 11 units were dispatched. A later press release stated that 13 units responded to the fire. These have been corrected.