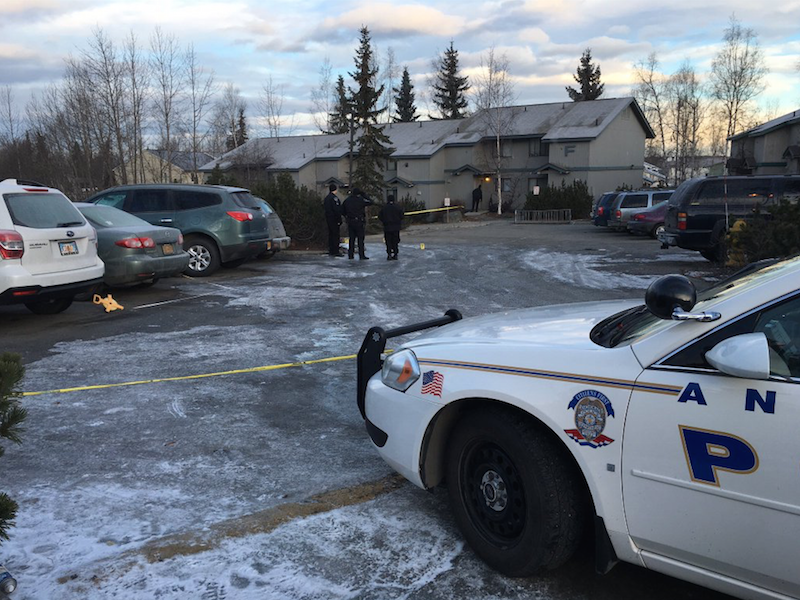 The deceased has been identified as 24-year-old Marchas Dushun Cosby Jr. Police said he died from multiple gunshot wounds.

“Detectives have not made any arrests at this time and are continuing their investigation,” police said in a statement.

No charges have been filed in the case and police are asking anyone with information to call APD at 786-8900 or Crimestoppers at 561-7867.

The Anchorage Police Department is investigating a man’s death in Eagle River Friday morning, labeling it as “suspicious.” The man was found outside a residence on the 16000 block of Centerfield Drive.

Police were called to the area at around 3:30 a.m. Friday to “conduct a welfare check on a home,” according to an APD release.

Neighbor at scene of Eagle River death: He & son were sleeping when they heard “pop, pop, pop” like gunfire. @ktva pic.twitter.com/u6z6ARMv51

“During the response, they located a deceased male on the ground near the residence,” the release says, adding that APD’s Crime Scene Team was called in to investigate further.

Jesse Pillittier says after the death near his home, he’s worried about his family’s safety.

Jesse Pillittier, who lives in a building near where the incident occurred, says he and his son were sleeping when they heard “pop, pop, pop,” which woke them up.

“I just heard gunshots,” he described. “I laid there for a few minutes and looked out the window, but I didn’t see anything at all … I just figured it was a bunch of kids playing a joke with, you know, firecrackers.”

But when police later arrived, Pillittier says the flashing lights woke him up again and the slew of APD vehicles outside his home made him realize something was wrong.

Pillittier says sometimes he sees “questionable characters that just come and go as they please” in his neighborhood and the surrounding area. As police began their investigation Friday morning, Pillittier was on his way to work, but his family’s safety was on his mind.

“Is my son going to be safe when I come back home?” he asked. “Crazy world we’re living in now, where people just are thoughtless of other people’s lives.”

Police say additional information on this incident will be released “as facts of the case are confirmed.”