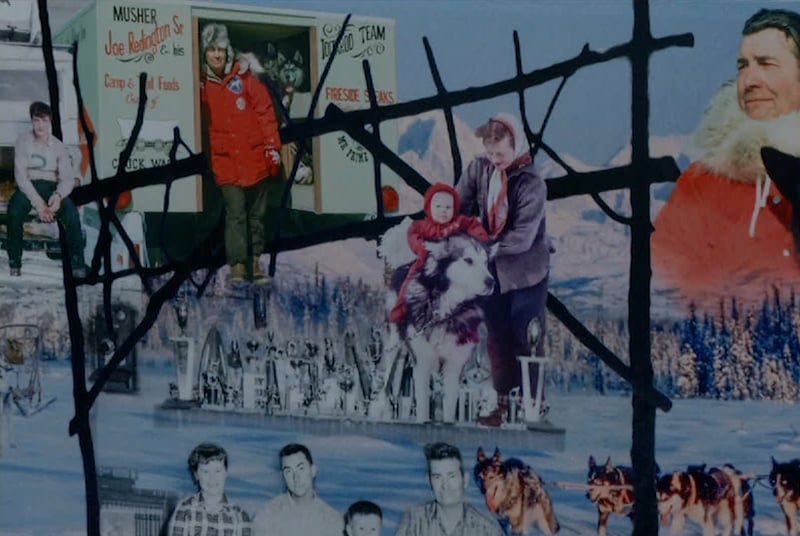 “He was kind of like the Alaska renaissance man,” said the Anchorage photographer, whose latest creation honors the many credited with the start of the Iditarod.

“(He) has as so many interests, and so many different talents, kind of jack of all trades,” Smith told KTVA about his latest project.

It hangs in the lobby of the high school in Wasilla named after Redington. It’s a giant mural the Matanuska-Susitna Borough hired Smith to do to honor the man associated with the Last Great Race.

“Joe was kind of the founding father, got it going from the get go. Joe’s life was pretty much a no brainer,” said Smith.

The mural is 72 feet by 9 feet, featuring two parts. The top half recalls Redington’s life.

“We start off with Joe as a small boy. There’s a picture of Joe and his brother Ray on the border when they first came to Alaska,” Smith said, presenting his project.

The bottom half of the mural honors the race Redington helped create.

“Starts off, Knick, Anchorage back in the day, all the way to Nome,” Smith said.

Most of the pictures Smith used for the mural came from the Redington family. Smith has done about 15 similar projects around the state, but he said none have been as challenging as this one.

“Typically on one of these projects, I get to play God,” Smith said. “I can say I want this there, I want that there, I can play with what is geographically the best. I had some constraints here because I had to follow the Iditarod Trail.”

Smith wants to use the trail he’s created to help children on their road to higher learning.

Funding from the state’s Percent for Art Program allowed the borough to hire Smith for the project. The program sets aside 1 percent from the construction costs of public buildings to buy artwork, and have it installed.