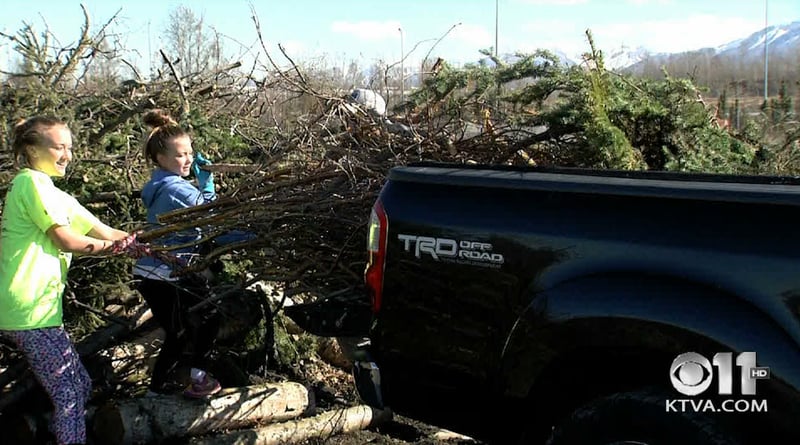 After a mild, dry winter, the Anchorage Fire Department is expecting a tough fire season. That’s why they’re taking preventive measures to ensure people are prepared. With AFD’s help, wood lots in South Anchorage and Girdwood are open several weeks earlier than usual.

He said brush and yard waste should be cleared from within 30 feet of one’s home, and that scrap should be brought to a wood lot as soon as possible.

“What we’re doing here is trying to prevent a major wildfire,” See said.

On its first day open, the wood lot at 100th Avenue and C Street received nearly 80 loads of wood. The manager of the lot said that while business is good, he isn’t expecting to turn much of a profit.

“By the time it’s all said and done, we’ll break even,” said Dave DeMenno.

Having run the wood lot during the two previous summers, he knows it usually isn’t a lucrative business. Instead, he does it as a service to the city.

“I’ve lived in Alaska about 35 years. Alaska has been good to me, and so it’s time to give a little bit of something back,” said DeMenno, who also owns Alaska Hydro-Ax.

Each load of wood costs $15 to be dropped off. South Anchorage resident Brad Melocik said he planned to make at least six trips, if not more.

“You can’t burn it, so it’s one of the most effective ways of getting rid of it,” he said, noting that in the past, the government provided subsidies to drop off wood. “I wish they’d do that again, honestly. I think there’s a lot of people that won’t pay the $15 a load, and we would actually like them to clear their lots off, as well.”

All of the wood collected at the lot is turned into mulch and brought to the Anchorage landfill, where it helps the garbage decompose and keeps away birds.

A burn suspension is in place in Anchorage. You can check whether or not burning is being permitted on a daily basis by calling the burn hotline: 907-267-5020.