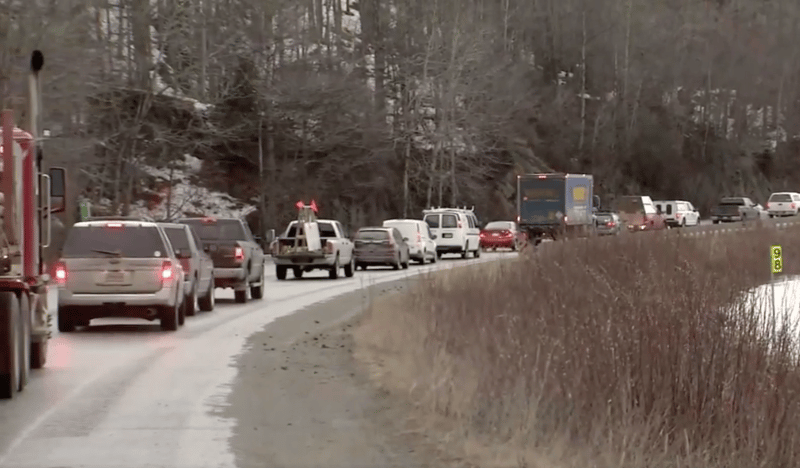 A manhunt that shut down the Seward Highway overnight near Beluga Point last week highlights a big question that still doesn’t have a clear answer: What will happen in a situation like that after April 30, when Alaska State Troopers halt regular patrols there?

AST Director Col. Jim Cockrell says when people called 911 Wednesday night to report a distraught man firing shots, troopers responded from Seward and Soldotna. He says they asked Anchorage police to assist them, since they could get there faster, but it’s ultimately an investigation that belongs to troopers.

But starting on May 1, state law enforcement will have limited coverage of the Seward Highway between McHugh Creek and Mile 75, only having a trooper on duty an average of 10 hours per 24 hour period. He says if an emergency happens when troopers are off duty, they won’t be responding, and it’ll be up to the Anchorage Police Department to take on primary responsibility for whatever happens on the road.

The state has been warning the Anchorage Municipality for months that they’re scaling back coverage of one of the most dangerous roadways in Alaska due to budget cuts. Cockrell says it’s the state’s position that Anchorage police need to step up and cover the highway, as it runs through the municipality.

Anchorage municipal attorney Bill Falsey has previously told KTVA, “State law defines the mandatory obligations of municipalities, and patrolling and policing a state-designated safety corridor on a state highway is not one of them. And APD cannot accept that responsibility because it is funded by taxes collected from a service area, and the state law says that taxes collected from a service area cannot be used beyond the service area.”

A spokesperson for Mayor Ethan Berkowitz’s office says APD legally can respond past McHugh Creek in an emergency, or at the request of another agency, but that still leaves the question of, “Who’s going to pay for it?”

It’s a dilemma south Anchorage Assemblyman John Weddleton says has been top of mind for some assembly members.

“We think about this a lot, we just have not come up with a solution,” Weddleton said.

Weddleton says the state shouldn’t be abandoning its duty of policing a state highway used by thousands of Alaskans, not just drivers who live in Anchorage, and the municipality is not financially prepared to take on the responsibility.

“There’s just no clear path forward for [us] to take over what is a clear responsibility of the state,” he said. “We need some city-wide funds to do it if we’re going to take over for the state.”

One possible solution already died on the Assembly floor in January.

A proposed 2 percent increase to Anchorage’s muni-wide bed tax could have been spent on policing the highway, but it was strongly opposed by the tourism industry and didn’t make it on to the April ballot.

Even resurrecting the measure wouldn’t be a timely fix, as any tax would have gather 60 percent of voters’ support before it could be implemented.

A remedy for communities like Indian and Bird Creek affected by the loss of troopers appears to be approved by voters. It will allow them to tax themselves to contract for APD services when needed, but the propositions clearly excludes any coverage of the Seward Highway.

Weddleton says it’s simply not fair or possible for a couple hundred people to be responsible for one of the busiest and most dangerous roads in the state, driven by thousands every year.