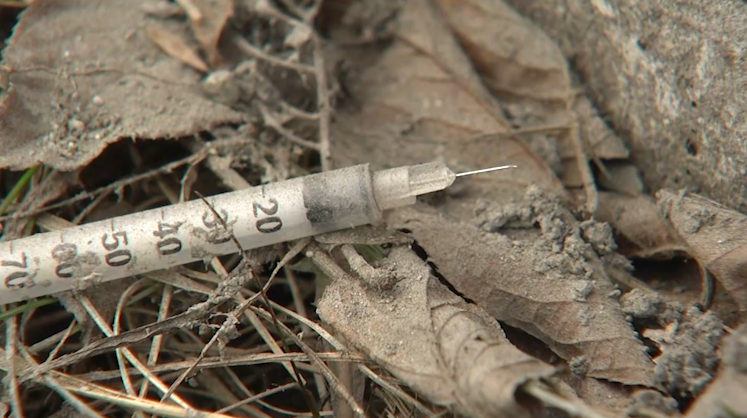 As the snow and ice melts around Anchorage, litter that’s been kept hidden under a long winter is now coming to the surface.

The good news is crews have gotten an early start to spring cleanup, says Anchorage Chamber of Commerce president Bruce Bustamante. But the bad news is they’re finding more than just trash beneath the breakup.

On a recent stroll through their Eastside neighborhood, Bernice Sliney and her 8-year-old daughter found a number of used needles along Boniface Parkway.

It’s one more conversation she and her fellow parents need to have now in the interest of keeping their kids safe, she says.

“I did talk to her and tell her ‘people use drugs, people use needles as drugs,'” Sliney recalled. “And having to explain that to your kid, you shouldn’t have to, but at the same time it’s something they have to know.”

Then, she showed her daughter the responsible thing to do– throw the needles in the trash.

Giving the local neighborhoods a spring cleaning is an annual ritual for the Anchorage Chamber of Commerce. This year, the citywide clean-up is scheduled from April 28 to May 6. In the meantime, people should be careful and follow the recommended protocol when disposing of discarded used needles, says Bustamante.

“There are hazardous materials out there such as needles and such,” he said. “We encourage people if you see something like that, like a hypodermic needle, to use your gloves.”

Bustamante is hoping the citywide cleanup effort this spring make Anchorage a safer place for Sliney and her family. And he hopes their responsible approach sparks other residents to do the same.

Still, Sliney says she wants to see the needles tossed in the trash the first time, by their respective users, so she won’t have to clean up a mess she didn’t make or have her daughter exposed to dangers she shouldn’t have to face.