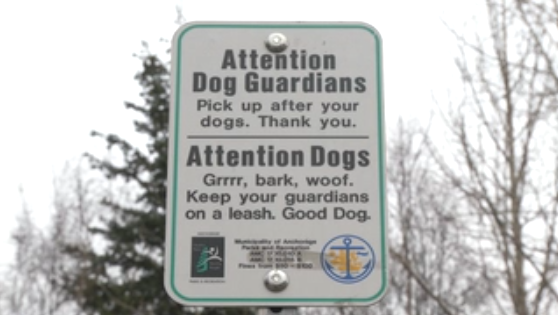 The signs of spring are evident at Taku Lake in Anchorage: birds chirping in the trees, a thin layer of ice melting on the lake and dog waste everywhere.

“Right on the edge of the water. That’s where kids are going to be swimming,” David Jensen said.

He volunteers his time picking up after other people’s dogs. Jensen said his mission is to make Anchorage trails cleaner for all users and he wishes others would do the same.

“I do feel civic responsibility. [I’m a ] lifelong Alaskan and I love this state, and I think that everybody has a responsibility to keep this place as beautiful as possible,” Jensen said.

The Anchorage Parks and Recreation Department provides free bags at many popular parks and trails, but Jensen is frustrated not everyone takes advantage of the resources.

“Sometimes, the most notorious places that I find poop are all around the little poop stations, and I think, ‘Really, you have to be kidding me,’” he said.

Animal feces are also bad for water quality. Thom Eley, a biologist for the Anchorage Waterways Council, said nearly every creek and lake in the area is polluted with bacteria.

Jensen said people should not only be concerned with their own health but that of their pets, too. He’s leery about letting his dog Layla near lakes.

“I’d like to know when my dog goes after a tennis ball in the water or retrieving bumper, that when it ingests some of the water, it won’t get sick later on. That’s a pretty tough battle we’re facing now,” he said.

The Municipality of Anchorage estimates there are about 65,000 dogs in town, producing up to 48,000 pounds of feces a day. Jensen said during spring breakup it’s clear some people aren’t responsible pet owners. He and a team of volunteers picked up 15 full bags of poop last weekend.

He encourages people to pitch in and do their part during the Scoop the Poop event. That’s Saturday, April 29 at University Lake from 11 to 3.

Jensen said a little bit of scooping goes a long way toward making Anchorage a healthier place for everyone.