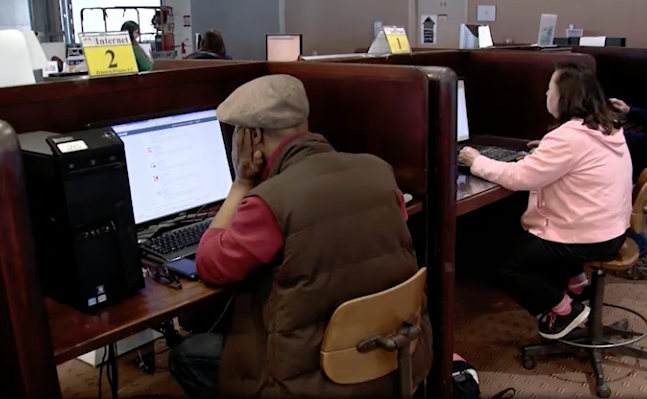 Most people who come to the Loussac Library don’t do it to watch pornography, but there are always a few who look at things other people might not want to see. The Anchorage Library Advisory Board is considering tightening up internet policies around what can be seen on public computers, and who can watch it.

Library director Mary Jo Torgeson explained the system is set up primarily to protect children. She said the library goes to great lengths to make sure children don’t have access to graphic content online, as required by federal law.

Torgeson said adults aren’t allowed on computers in the youth section. And computers there are blocked from accessing graphic websites. But it’s a different story on the third-floor computers.

In general, people can watch what they want as long as they aren’t bothering or offending others, according to Torgeson. She said people who feel uncomfortable about what other people are watching shouldn’t hesitate to complain to library staff.

“They need to come and tell us,” said Torgeson. “We will round up several staff members and we will go and talk to the person viewing the content.”

Torgeson said library staff worked for months to develop policies on internet usage. In the end, they chose to focus on “conduct not content” and consider each incident on a case by case basis. She said banning pornography outright would be difficult to enforce since current filters don’t work particularly well and it would be left up to librarians to determine what they consider pornographic before asking a person to turn it off.

The Library Advisory Board will make the final decision on what policies to adapt. They’ll consider it at their next public meeting. People are welcome to testify on the subject.

The meeting is Wednesday May 3rd at 5:30 on the fourth floor of the Loussac Library.