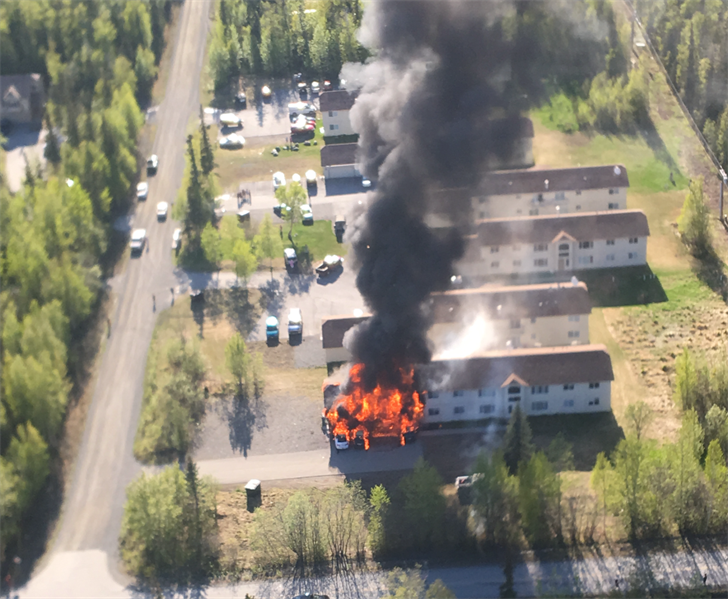 The apartment fire was visible from Hatcher Pass. (Courtesy of Kent Knapp)

On Tuesday, the Red Cross of Alaska said they assisted 22 people — 9 children and 13 adults — for “lodging and immediate needs.”

Red Cross said they used the North Bear Street Baptist Church as their temporary station over night, but all families have settled into hotel rooms. The nonprofit said its case workers are going to follow up with those displaced, to work on long-term recovery plans.

Thirty people have been displaced after a Wasilla apartment building was heavily damaged by fire Monday evening.

All of the occupants were able to escape unharmed, according to Ken Barkley, Fire Deputy Director for the Matanuska-Susitna Borough.

He said the fire looks to have started in an attached garage, then spread to one of the connected apartments located at 5701 Beaver Ave.

Crews sift through the remnants of the apartment fire. (Daniella Rivera / KTVA)

The fire destroyed four vehicles and two ATVs at the apartment complex. It also caused ammunition to go off as emergency responders were on scene.

Barkley was unsure when exactly the blaze began, but the photos above were taken by a KTVA viewer who was flying over the area at around 6:45 p.m.

Most of the fire had been put out shortly after 8 p.m., with crews still battling “hot spots,” said Barkley.

The Red Cross is on scene assisting displaced residents.

A temporary shelter has been set up at the North Bear Street Baptist Church.

Otto Feather, Director of Emergency Services for the Matanuska-Susitna Borough, said the building is not a total loss. He also said he was proud of his team’s fast response in putting out the blaze.

This story has been updated to reflect the total number of residents displaced, as reported by James Steele, District 1 Fire Chief for the MatSu Borough.