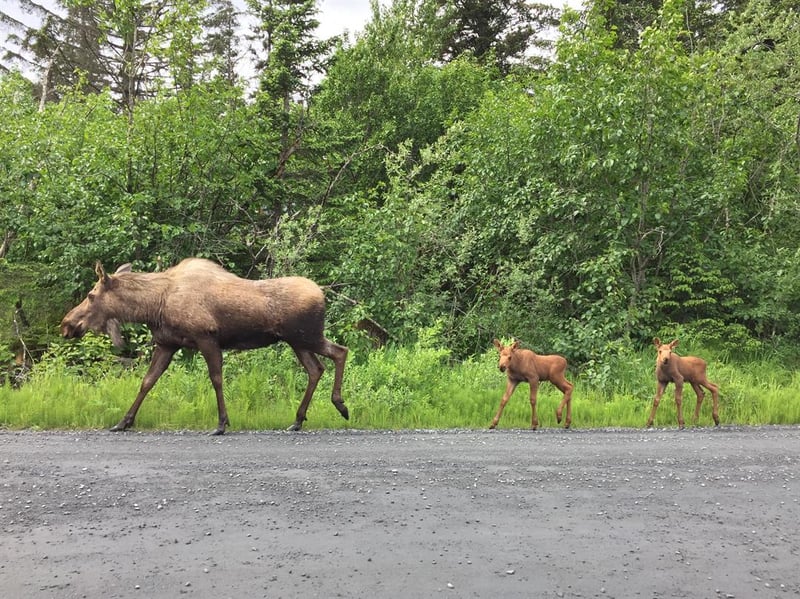 Mama moose & her calves taking a stroll in Seward

The Alaska Department of Fish and Game is warning people to be very careful around moose, especially those with calves.

Biologist Dave Battle said the Department has seen a higher-than-usual number of people hurt by moose this spring– at least eight so far.

“We always have a lot of close encounters, and occasionally somebody will get kicked and a moose will make contact,” said Battle, “But, it seems like it’s happening more than usual this year. People need to understand how dangerous an animal a moose can be and particularly a cow with calves that is going to be very defensive of her calves.”

Battle said the most serious situation reported so far happened last Monday in the Eaglewood subdivision in Eagle River. A woman walking her dog on a neighborhood trail was attacked by a moose with two calves. The woman had multiple broken bones and lacerations and was taken to the hospital.

Neighbors said the same moose attacked two other people– including a child– although, neither was seriously hurt.

Battle said it might be best to stay off trails where moose frequent for another week or so until most moose have calved and some have moved on. He said anyone in the woods should be extra alert to the presence of moose and give them a wide berth.

Battle’s best advice if a moose does charge? Run!

“Don’t ever run from a bear, but you do run from a moose,” said Battle. “A moose is strictly being defensive. It can run faster than you, but, usually, if it sees you are heading away from it, it will break off the charge. And if you get behind a car or a tree or something, you can usually make corners faster than they can.”