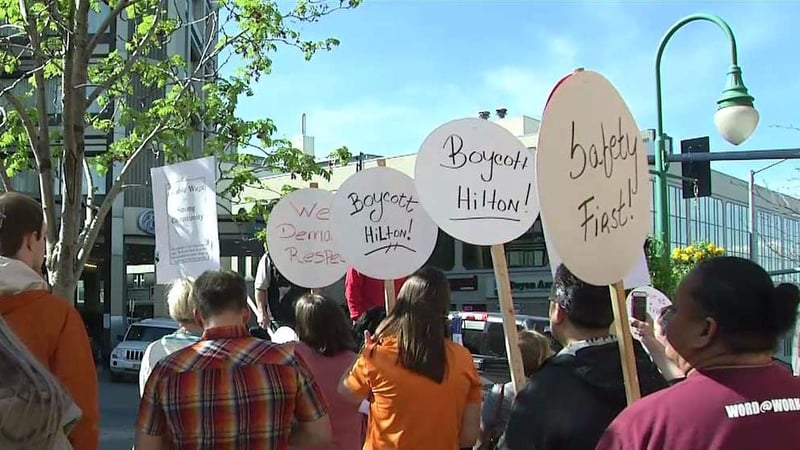 A years-long labor dispute between workers and a popular Downtown Anchorage hotel continues.

Thursday, dozens of Anchorage residents gathered outside the Hilton Hotel at the corner of 4th Avenue and E Street to protest, what they call, unsafe conditions for employees and guests.

The hotel is owned by Columbia Sussex, a company based in Kentucky. After they took over, they did not renew a union contract with employees, who say conditions have only deteriorated since then.

“The Hilton for years now has been an unsafe working environment,” said Anchorage Assembly member Felix Rivera, who joined the march.

“They say we can’t get a contract. I got three words: Yes we can,” said employee Ian Fox, addressing the crowd outside his workplace.

As a veteran, Fox has healthcare through the VA system, but is putting his job on the line to fight for others who don’t.

“A lot more people have risked a lot more in the past to get us where we are,” he said during an interview Thursday.

Protestors paced the sidewalk in front of the Hilton, chanting “Don’t check in, check out!” as tourists looked on.

“Go somewhere else, go to a place that respects its workers enough and its customers enough to keep a clean environment,” Assembly member Chris Constant said.

He says a ‘mold ordinance’ is in the works, with the Hotel as inspiration, but wasn’t sure when it will be introduced.

The labor union Unite Here Local 878 points to numerous OSHA violations, saying the company paid out more than $14,000 between 2009 and 2015 in fines for citations, and OSHA has already cited them for seven alleged violations this year, totaling almost $3,000 in proposed fines.

KTVA reached out to Columbia Sussex via phone and email Thursday, but did not hear back. When we approached the manager of the hotel, he said “We wish not to comment at this time,” then asked us to leave.

The display outside only lasted about an hour before things returned to normal. Guests will continue to check in and check out, and employees like Fox will serve them with a smile.

“I go all out for them,” Fox said. “It’s not their fault this is happening.”

But the protestors want the company to know they’ll keep fighting for better conditions, chanting, “We’ll be back, we’ll be back.”