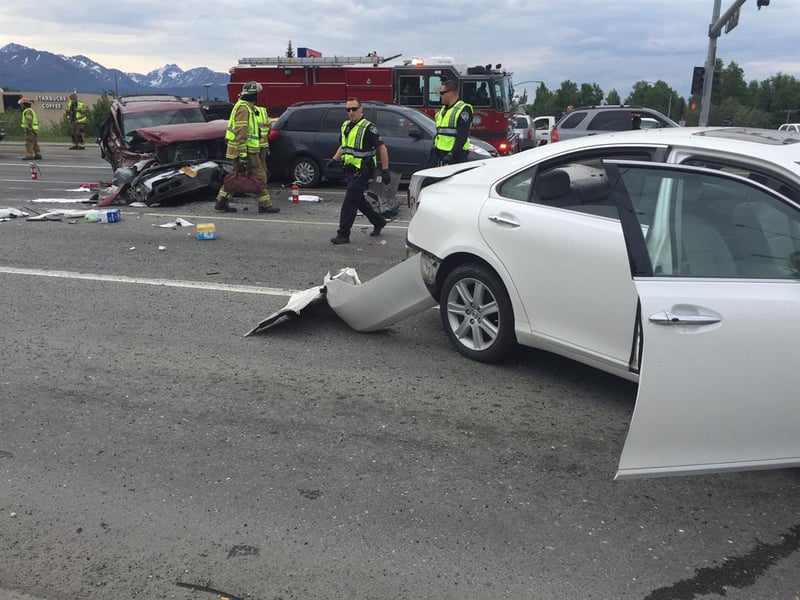 Anchorage Police say the multi-vehicle crash that happened at the intersection of the Glenn Highway and Airport Heights Drive sent four people to the hospital.

The crash happened around 10:30 Friday morning. First responders rushed to the scene and Anchorage Police say part of the Glenn Highway was closed in both directions while crews worked to clear the scene. By 11, the outbound lanes had reopened; by 12, APD said the scene had been cleared and all lanes had reopened.

Tom Anderson, a retired state trooper and one of the drivers who ended up getting stuck in traffic because of the crash, says he saw the accident unravel from half a mile away. He says the maroon SUV swiped a semi-truck and kept going, eventually slamming into other cars waiting at the red light.

“As he was taking off, parts were flying off his vehicle,” he said. “And smoke was coming out of the engine compartment and he rolled into this intersection of Airport Heights and Glenn Highway and smashed into all these cars that were waiting at the stop sign.”

Anchorage Police hasn’t released any additional details on what exactly caused the crash.

APD officer on scene tells me at least two ppl taken to hospital – still on scene, talking to other drivers who were on the road. https://t.co/zSLK0SVmX2

Traffic was temporarily diverted while the scene was cleared.