Mike Goodson a no-show for Jets 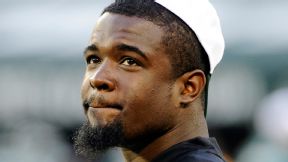 FLORHAM PARK, N.J. -- Troubled running back Mike Goodson didn't show up Tuesday for mandatory minicamp, and the New York Jets have no idea why.

A miffed Rex Ryan said neither he nor anyone in the organization has talked to Goodson, who still faces a weapons-possession charge stemming from his arrest last year. Previously, Goodson skipped the 10 voluntary practices without informing the team of his whereabouts.

"I recognize the fact that he's not here, and that situation will be dealt with," Ryan said after practice.

Goodson's days with the team appear numbered. His off-field issues have been a major headache for the Jets, who signed him last year as a free agent for $6.9 million over three years.

Minicamp is a mandatory team activity, so Goodson is subject to a fine, according to the collective bargaining agreement. The maximum fine is $69,455 if he is a no-show for all three days.

Ryan noted that he has never had a player miss a mandatory minicamp, cracking that even former Jets cornerbackDarrelle Revis showed up during his contract squabbles. Revis, though, missed the 2010 training camp because of a holdout.

Ryan spoke cryptically when asked if cutting Goodson is a possibility.

"Let's just see what happens," he said. "I've basically said all I'm going to say about it. We'll just talk about the guys that are here."

Goodson's agent, Kennard McGuire, released a statement, but it didn't specifically address why the veteran running back didn't report.

"Mike must be accountable and responsible for his own actions and comprehend not only effective communication but simple communication," McGuire said.

Goodson is rehabbing his surgically repaired knee, injured in October. It's possible the Jets are keeping him on the roster because they don't want to cut him with an injury, putting them on the hook for part of his salary.

Since signing 16 months ago, Goodson has been making headlines for all the wrong reasons. It started last May, when he was arrested in New Jersey on the gun-possession charges. He was incoherent and intoxicated at the time of the arrest, police said. He received a four-game suspension for violating the league's substance-abuse policy.

He was indicted in November on a charge of second-degree unlawful possession of a weapon after he was found in a car with a Taurus .45-caliber handgun loaded with an illegal hollow-point bullet, according to authorities. He faces up to 10 years in prison if convicted of the charges. He also could be suspended again by the league for violating the personal-conduct policy.