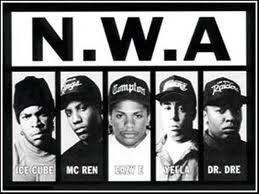 Gangsta rap is a subgenre of hip hop that reflects the violent lifestyles of inner-city American black youths. Gangsta is a non-rhotic pronunciation of the word gangster. The genre was pioneered in the mid 1980s by rappers such as Schooly D and Ice T, and was popularized in the later part of the 1980s by groups like N.W.A. Ice-T released "6 in the Mornin'", which is often regarded as the first gangsta rap song, in 1986. After the national attention that Ice-T and N.W.A created in the late 1980s and early 1990s, gangsta rap became the most commercially lucrative subgenre of hip hop.

N.W.A is the group most frequently associated with the founding of gangsta rap. Their lyrics were more violent, openly confrontational, and shocking than those of established rap acts, featuring incessant profanity and, controversially, use of the word "nigger". These lyrics were placed over rough, rock guitar-driven beats, contributing to the music's hard-edged feel. The first blockbuster gangsta rap album was N.W.A's Straight Outta Compton, released in 1988. Straight Outta Compton would establish West Coast hip hop as a vital genre, and establish Los Angeles as a legitimate rival to hip hop's long-time capital, New York City. Straight Outta Compton sparked the first major controversy regarding hip hop lyrics when their song "Fuck Tha Police" earned a letter from FBI Assistant Director, Milt Ahlerich, strongly expressing law enforcement's resentment of the song. Due to the influence of Ice T and N.W.A, gangsta rap is often credited as being an originally West Coast phenomenon, despite the contributions of East Coast acts like Boogie Down Productions in shaping the genre.

The subject matter inherent in gangsta rap has caused a great deal of controversy. Criticism has come from both left wing and right wing commentators, and religious leaders. Gangsta rappers often defend themselves by saying that they are describing the reality of inner-city life, and that they are only adopting a character, like an actor playing a role, which behaves in ways that they may not necessarily endorse.