FRANKLYWNOW - What Does Your Watch Say About You?

What Does Your Watch Say About You? 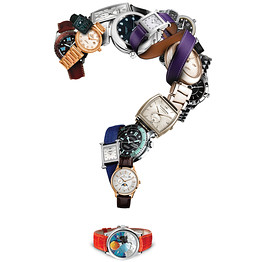 As an indicator of one's status or taste – or lack thereof – watches have become the new shorthand. Since the Great Watch Revolution of the 1980s, when mechanical timepieces returned in force as a backlash against cheap-and-nasty quartz, and when vintage watches started to appear in auctions in greater numbers, awareness of the wristwatch has acquired a new significance.

Previously, anything more obscure than a Timex or an Accurist was appreciated only by cognoscenti. Watches were far too small to be in-your-face indicators of serious wealth – not like the Ferrari 212 Barchetta or Maserati 300S that a Porfirio Rubirosa or a Roberto Rossellini might have parked in front of Monaco's Hotel de Paris.
Take Rolex. While everyone now recognizes the name, back in the 1950s and 1960s the brand was known almost exclusively by the pilots and professional divers who actually needed the functions the watches offered. Today, watch literacy has soared and the hugely popular television series, Mad Men, even uses watches to trace the ascent of hero Don Draper. By Series Three, Draper is seen wearing a Rolex Explorer.

As for brands such as Patek Philippe, Audemars Piguet, Vacheron Constantin and even the ineffably famous and recognizable Cartier, they were only understood by aristocrats and the gentry. Yes, there were exceptions: Duke Ellington, Miles Davis, Gene Autry, Howard Hughes (allegedly) and other iconic celebs wore Patek Philippes. Marlon Brando and Che Guevara owned Rolexes, while Steve McQueen foreshadowed the modern watch fanatic with his Rolexes and TAG Heuers. Now, the red carpet at the Oscars is a watch-lover's orgy. But this is not to suggest that populism nor egalitarianism have overtaken the prestigious image such watches impart. What has changed is that now everyone from the cab driver to the doorman, to the dentist to the divorce lawyer – especially the divorce lawyer – knows the difference between fine timepieces and those sold to mere mortals.