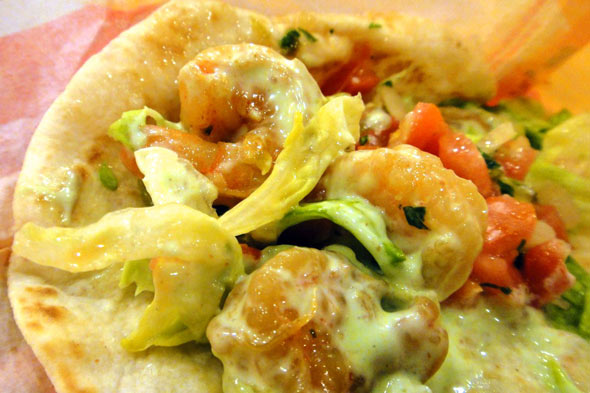 As the "Fish Fridays" of Lent continue, the folks at Taco Bell want remind all the observant omnivores out there that fish isn't the only game in town -- shrimp is fair game, too. And as we all know from "Forrest Gump," shrimp can be prepared in many ways -- you can barbecue it, boil it, broil it, bake it, or sauté it. Taco Bell has jumped on the proverbial shrimp boat, and now offers the Pacific Shrimp Taco and Burrito. Here's how they rate:

The Claims: Both the Pacific Shrimp Taco and Pacific Shrimp Burrito are made with soft flour tortillas, and start with "six succulent shrimp, marinated in spices, crisp shredded lettuce, creamy avocado ranch, [and] fiesta salsa." The tortilla of the burrito is larger, allowing for two additional ingredients: a shredded three-cheese blend and crispy red tortilla strips.


See the verdict after the jump.
The Verdict: B+. Taco Bell started the year off with a rough start with that whole class-action-suit-mystery-meat ordeal, but there's no mistaking shrimp for shrimp -- even if there are only six of them per taco or burrito. However, six shrimp is sufficient because all the other ingredients come together to make each of these offerings a light and surprisingly tasty fast-food delicacy -- tasty enough that I didn't feel it necessary to add any hot sauces like I normally do with most other items at Taco Bell. There is a nice melody of textures and flavors in the taco; the shrimp is firm, the tortilla is soft and chewy (although you could also opt to order it with a hard shell), and the creamy avocado ranch flavor plays well with the hint of smokiness in the shrimp's marinade. Granted, these flavors are probably engineered, and the lettuce could be crisper, but fast food is what it is. The diced tomatoes, onions and cilantro in the salsa are definitely a nice touch of "freshness," and complement the rest of the taco's ingredients.

If you have the means and/or appetite, upgrade to the burrito though, the added ingredients actually add to the Pacific Shrimp eating experience. The blend of shredded cheese gives a little more salty and umani taste (as well as calories) than you get from the taco, plus the red tortilla chips add some crunchy texture and a little added bite. (Perhaps that's because they suspiciously look suspiciously like they might just be chopped red Flamin' Hot Fritos used in the Beefy Crunch Burrito). Whether or not that's the case, these offerings are both a decent lighter -- yet filling -- offering from outside the bun.