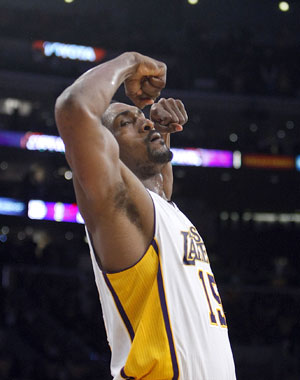 Ron Artest blew kisses to the crowd in the first overtime after his three-pointer gave the Lakers a 119-116 lead.

Artest kissed his biceps after his steal led to his dunk and a 135-132 Lakers lead in the third overtime.

Artest was animated during the Lakers' 139-137 triple-overtime victory over the Phoenix Suns Tuesday night at Staples Center.

"I kind of knew what the outcome was going to be, so I was relaxed" Artest maintained. "We talked about it."

It figures Artest would talk this way, because only he can sum up his play that way.

Artest had seven points during the overtimes, three in the first OT and four in the third, all of them important.

He finished the game with 18 points on seven-for-14 shooting.

He also had three steals and one blocked shot in 48 minutes, 29 seconds.

"No, I'm not tired," Artest said. "I knew what was going to happen so I was just out there skating."

Artest and Kobe Bryant, who finished with 42 points, 12 rebounds and nine assists, were the only Lakers to score in the third overtime.

"We knew we had to help him," Artest said about Bryant. "When the Black Mamba [Bryant] wants to put his mind to do something, he hits big shots. He was animated and he inspired us. He trusted us when it most counted. He trusted us in that last overtime."

The blowing kisses to the crowd and kissing his biceps has become a common thing for Artest.

"I'm tired of doing that," Artest said. "They forced me. Yeah, I had a good time, but I don't want to do that anymore. The crowd keeps forcing me to do it. I need to do something else, maybe like a backspin. I'll do that next time."